…and blogging in the dark

staring at this totally black SKYPE window, my eyes are slowly giving in to gravity.

no it’s not another case of stitches, in fact, it could possibly be worse.

he’s been posted out of RP, to SISPEC.

i know, we’re still in shock too. for better or worse, we still don’t know. but one thing i know for sure, it’s gonna be BMT all over again, times two.

that’s not all the bad news. my camera half died on me. it’s been taking photos like that :

so i took it down to Canon to get it checked. initially she said, oh you’re gonna have to leave it here for observation cos it’s not a direct problem. the problem is on and off you see, and it so happens when i brought it there, it went back to working fine. stupid camera. >_<

nope, i wasn’t going to leave until i managed to persuade her to bring it in to the technicians for a “diagnosis”. after which she kept telling me it won’t be done by Christmas, or even New Years… so i asked her about the express repair stated on the website, i mean really, why put it off for another week when i can get it done by tomorrow for $25?

seriously, it’s just $25. i rather pay them $25 to fix my camera overnight than to suffer for a week or more without it! that’ll cost me like $250 worth of pain being without a camera.

but yea, that means i have to go all the way down to Harbour Front again just to pick it up… and then go straight for dinner at Ritz Carlton. gosh, i wonder if there’ll ever be a day i won’t be running around like a mad cow. and i bought so much stuff while i was at Vivo… see, when i don’t have my camera, i can’t take photos of my shopping loots, so try to use your imagination for this one, okay?

i bought 4 packs of Tim Tam, 2 rolls of Rich Tea Biscuits, 1 pack of Cheese & Onion Crackers, 1 pack of Tiny Teddy Biscuits, and a box of candy canes from Candy Empire. total damage? $25. not too bad… but wait, i’m not done. i also spent $90 at Daiso. yes, $90 at a $2 store. murder me. seriously. i got so carried away buying things like pump bottles, eyebrow shavers, stamp ink, stamps (uber cute by the way), zip lock bags, paper clips, hair pins, pen organisers, erasers for carving more stamps… you name it, i bought it.

now my arms realllllly hurt! after all that i even went to popular at Northpoint to get a laptop fan for daddy’s present. lugging around all that shopping! my arms really don’t feel very connected to my body right now. so i guess i should call it a night. but i’ll leave you with my pack of tiny teddies! 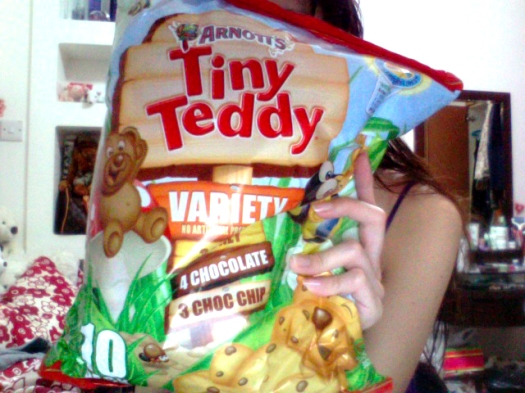 i opened it already! the honey ones are so yummy! :P